Touted as a modern metropolis to rival London and packed with places of interest, Lisbon is a city that is really going places. There is a plethora of history here, with tales of everything from Roman imperialists to exotic Berber pirates, Moorish builders to fierce Reconquista knights, all wrapped up in the grand palaces and heritage districts. But there is also an atmosphere of bohemianism and the surprise of the new here too. Let’s explore the best things to do in Lisbon.

Best Things To Do In Lisbon

1. Wonder at the Torre de Belém 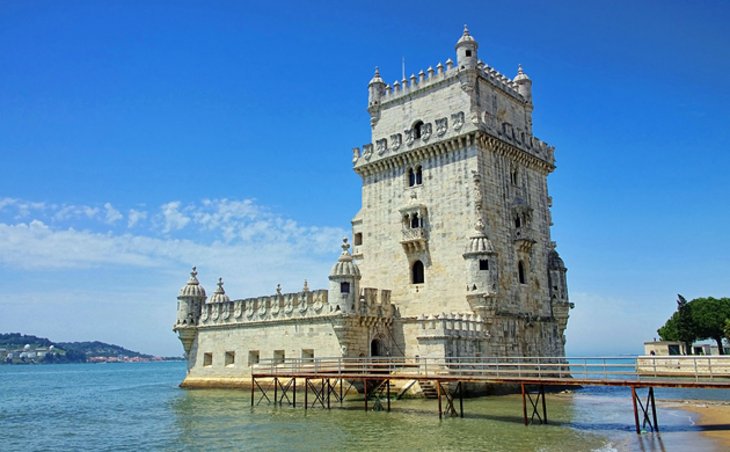 If there is just one landmark you visit when touring through the Portuguese capital, make it this one.

Soaring high above the seafront of the Lisbon quays, this great tower displays a veritable fusion of architectural styles from the Mudejar to the Moorish, the Gothic to the Romanesque.

It has stood watch over the mouth of the Tagus River since its construction under the patronage of Saint John back in the 16th century.

Since then, it has risen to become perhaps the most iconic feature of the city, famed as the last sight adventurers like the prodigal Vasco da Gama would have seen as they drifted out into the vast Atlantic Ocean.

Like San Francisco in the United States, Lisbon is a city famed for its historic, rattling tram lines.

None are more iconic than Tram 28 which has been working its way up the steep, cobbled roads and into the old Alfama district for decades.

The journey starts below the palm-spotted hills of Graça, and weaves toward the hair-pin alleys of Escolas Gerais, before pulling up to a halt beneath the gorgeous domes of the Estrela Basilica.

The people-watching opportunities from the windows are second-to-none, and you’re bound to discover decades of history as you pass the various majestic palaces and castles along the route.

3. Get lost in the Alfama District

The compact little Alfama District is Lisbon’s answer to the old town centers of Europe’s other ancient capitals.

Like the Forum of Rome, it’s hailed as the oldest part of the city, although this one dates back to the Moors of Africa instead of the kings of Latium.

Delving into the warren of winding streets and alleys that forms the district is one of the top activities for visitors to Portugal’s capital.

As you stroll, great cathedrals like the Lisbon Cathedral and tile-fronted chapels reveal themselves on the corners.

There are also the remains of old city walls and hidden squares with al fresco cafes aplenty.

A highlight of any Lisbon sightseeing tour, the 16th-century Jerónimos monastery is one of the great landmarks of Portugal, a stunning monument of immense historic and cultural significance deserving of its UNESCO World Heritage Site accolade.

Near the riverfront in Lisbon’s attractive Belém neighborhood, the monastery, also known as the Hieronymite convent, was commissioned by King Manuel I in 1501. Built to honor Vasco da Gama’s epic 1498 voyage to India, Jerónimos is as much a symbol of the wealth of the Age of Discovery as it is a house of worship (construction was mostly funded by trade in the spices brought back by da Gama).

5. Make a trip to Sintra

‘Did you go to Sintra?’ is the usual question asked by veterans of Portugal’s capital.

Despite being a totally different city and situated more than half an hour away from Lisbon by car, the glorious town of Sintra remains one of the major attractions here.

Daytrips are common, while others will want to spend a couple of days exploring this UNESCO World Heritage Site.

It sits high up amidst the mythical Mountains of the Moon, displaying elegant baroque churches, colorful mansions and the grand palaces of former Portuguese kings and queens.

The National Museum of Ancient Art is one of Lisbon’s great cultural attractions, and a “must see” on any tourist itinerary. This is Portugal’s national gallery and houses the largest collection of Portuguese 15th- and 16th-century paintings in the country. An equally impressive display of European, Oriental, and African art adds to the allure.

The museum is set west of the city center within a 17th-century palace, itself built over the remains of the Saint Albert Carmelite monastery, which was virtually destroyed in the 1755 earthquake. Fortunately, the chapel survived and is integrated into the building.

Set over three levels, the extensive permanent collection requires a good two hours of your time. Begin by exploring the aforementioned St. Albert Chapel on Level 1 and then meander through rooms exhibiting Portuguese applied art: furniture, tapestries, and textiles, among other objects, many reflecting the influences of Portugal’s colonial explorations. (Look out for the exquisite 17th-century casket from India crafted in silver gilt.)