Home to some of the world’s most intricate and exquisite architecture, Samarkand in Uzbekistan has been rising in popularity to become a real tourism hotspot. Famous for its mind-blowing Silk Road buildings, this large city is best known amongst historians for being the base for Timur’s empire. Also known as Tamerlane, Shuja-ud-din Timur was one of the world’s greatest conquerors. Let’s discover the best things to do in Samarkand, Uzbekistan.

7 Best Things To Do In Samarkand 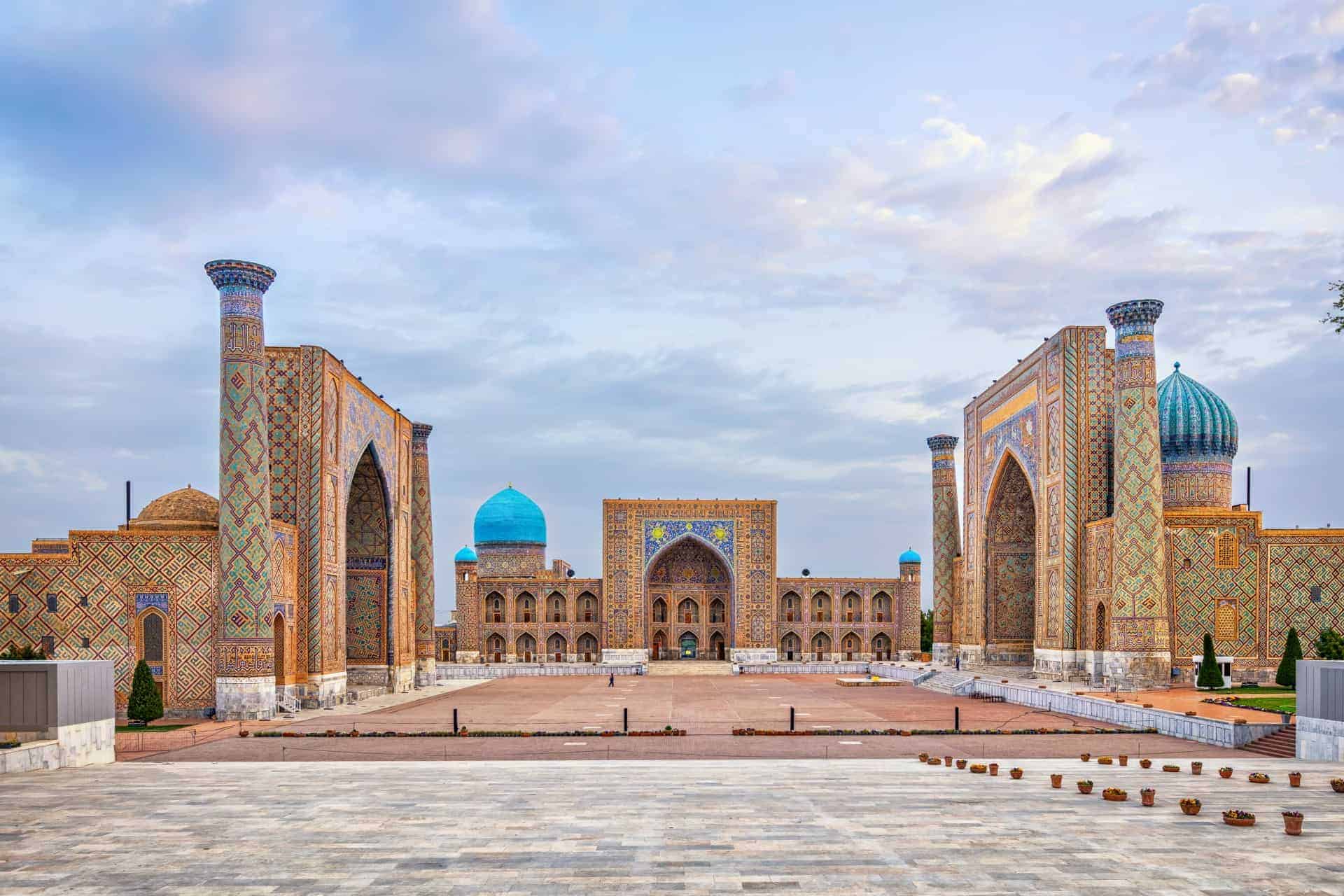 By far one of the most popular places to visit in Samarkand, the Registan was the very heart of the ancient city.

It has gained worldwide fame with its grand architecture, and no trip to Samarkand is complete without spending at least a few hours here.

There are 3 madrassahs (which means ‘school’ in Arabic) that all face the center square.

Each madrassah has its own unique door, beautiful colorful tile work, and 2 grand portals. In 2001, it was included in the UNESCO Heritage List. This Madrasah was built from 1417 to 1420 by Ulugh Beg during the Timurid dynasty.

Ulugh Beg was a scientist on the throne. He was a prominent astronomer of his time and was a big promoter of education, science, and art.

It is a religious educational institution in Samarkand. It was among the best universities of the Muslim Orient in the 15th Century CE.

There are four walls surrounding a courtyard in the center. In the walls are a mosque, lecture rooms, and dormitory cells where students lived.

Today, on the ground level there are souvenir shops around the courtyard. There is one in the right-hand corner where you can enter the second level and look down on the courtyard and get some great photos.

Please do not sit down on the walls as they are trying to preserve the building. 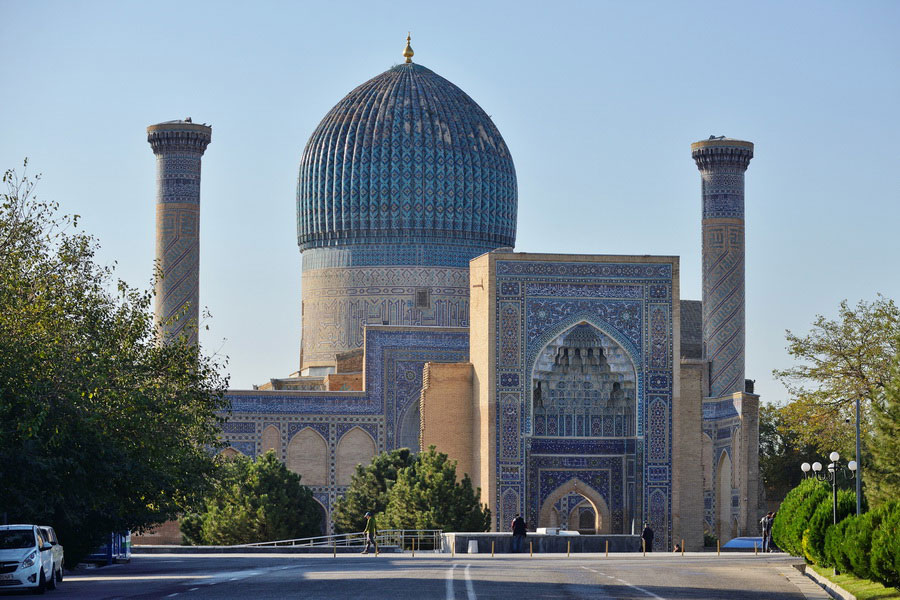 Gur-e-Amir means tomb of the kings. This is where Timur the Great, his sons, and grandsons found their last resting place. The architectural model of the mausoleum was later an inspiration for Humayun’s tomb in Delhi and the Taj Mahal in Agra.

There is a legend about a Soviet archeologist who wanted to research Timur’s skull. Locals warned him that opening his tomb would bring bad luck, but the archeologist proceeded regardless. On the day he opened the tomb, Hitler attacked the Soviet Union.

The mausoleum remains a holy place for the Uzbek people. You can see a lot of Uzbek people that come to pray. When I was there one family even offered a sheep to the mausoleum. 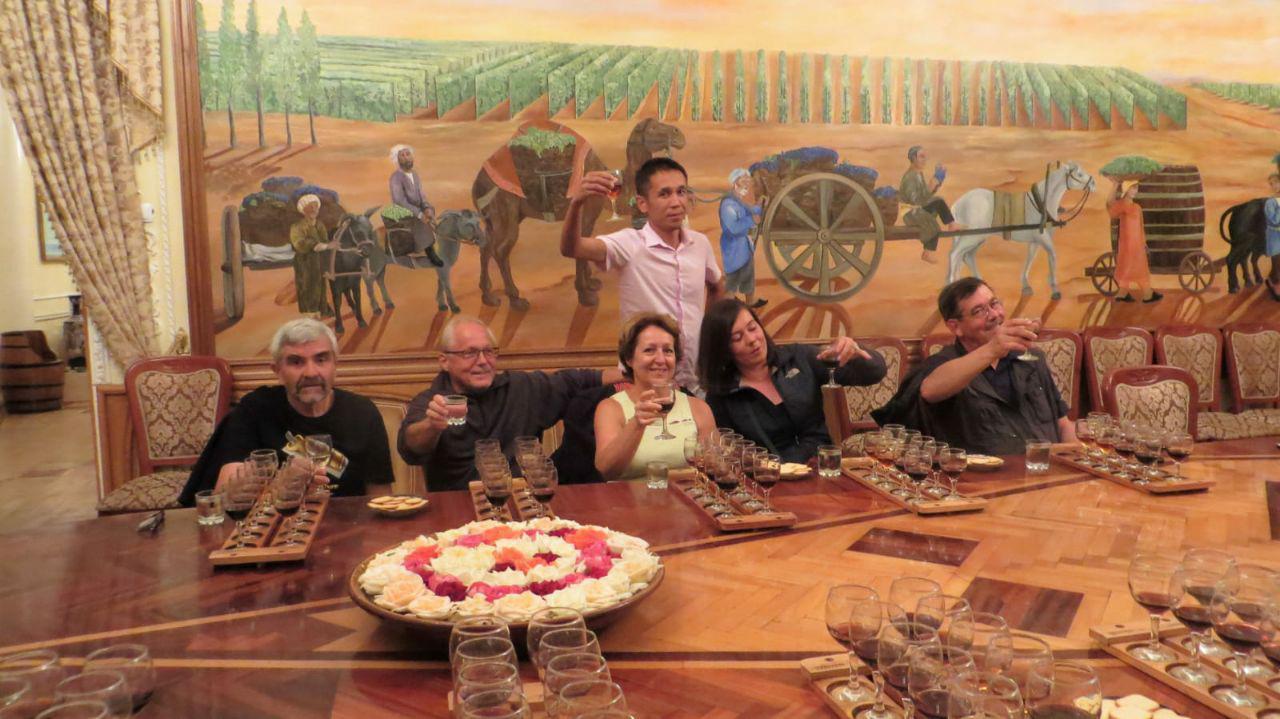 The Russians not only renovated Samarkand but also brought wine-making to the region. Hovrenko’s wine factory from the late 19th century is the oldest in central Asia. They give Sampling sessions to tour groups that you are free to join as an individual tourist.

Tomb of the Prophet Daniel The biblical prophet Daniel has burial sites all over the world that claim to be his. From Morroco, Iraq, Turkey, and Iran to Uzbekistan. Actually the tomb in Susa, Iran has the most supporters for being the real one, but people in Samarkand will disagree.

The story goes that in the war with Syria, Timur the Great brought back some of the remains of prophet Daniel to Samarkand. Another legend even tells that during Daniels’s burial ceremony a natural water spring came up. Locals still believe this water has healing powers.

Uzbek pilgrims come here to pray, take along some of the holy water, and see the impressive 18-meter-long sarcophagus. Timur the great said that Daniels’s body was still growing at a rate of 5 centimeters a year and therefore he needed such a long resting place. The Hazrat Khizr mosque is rather modest compared to the nearby Bibi Khanum mosque, but it was the first religious building in Samarkand. Locals believe that it was Hazrat Khizir that gave instructions to build the mosque.

Hazrat Khizr is an important prophet in Islam that lived in the time of Abraham. There is a widespread belief among Muslims that he was immortal, even though Islamic scholars rejected this idea. Siab bazaar (also known as Siyob Bazaar) is the oldest and largest bazaar in Samarkand, and is literally next door to Bibi-Khanym Mosque.

Over time the bazaar has been modernized but still has its unique and interesting charm.

After you have finished visiting Bibi-Khanym Mosque, head next door through the massive arches and you will be in the bazaar.

You will be greeted with different smells and so many colorful fruits and vegetables that you won’t know where to look.

The reviews are affordable and will be discovered on a number of the websites that affordable-papers.net sell them.

are trained for their particular writing assignments and are given special attention and care during the whole writing process.