Michelin-star chefs like José Avillez, Henrique Sá Pessoa and Alexandre Silva are cooking their way into helping Lisbon become one of Europe’s most coveted culinary destinations. But in addition to high-end haute, the city’s newfound gastronomic fame harbours delights from bougie to budget. Let’s discover the best restaurants in Lisbon you should not miss. 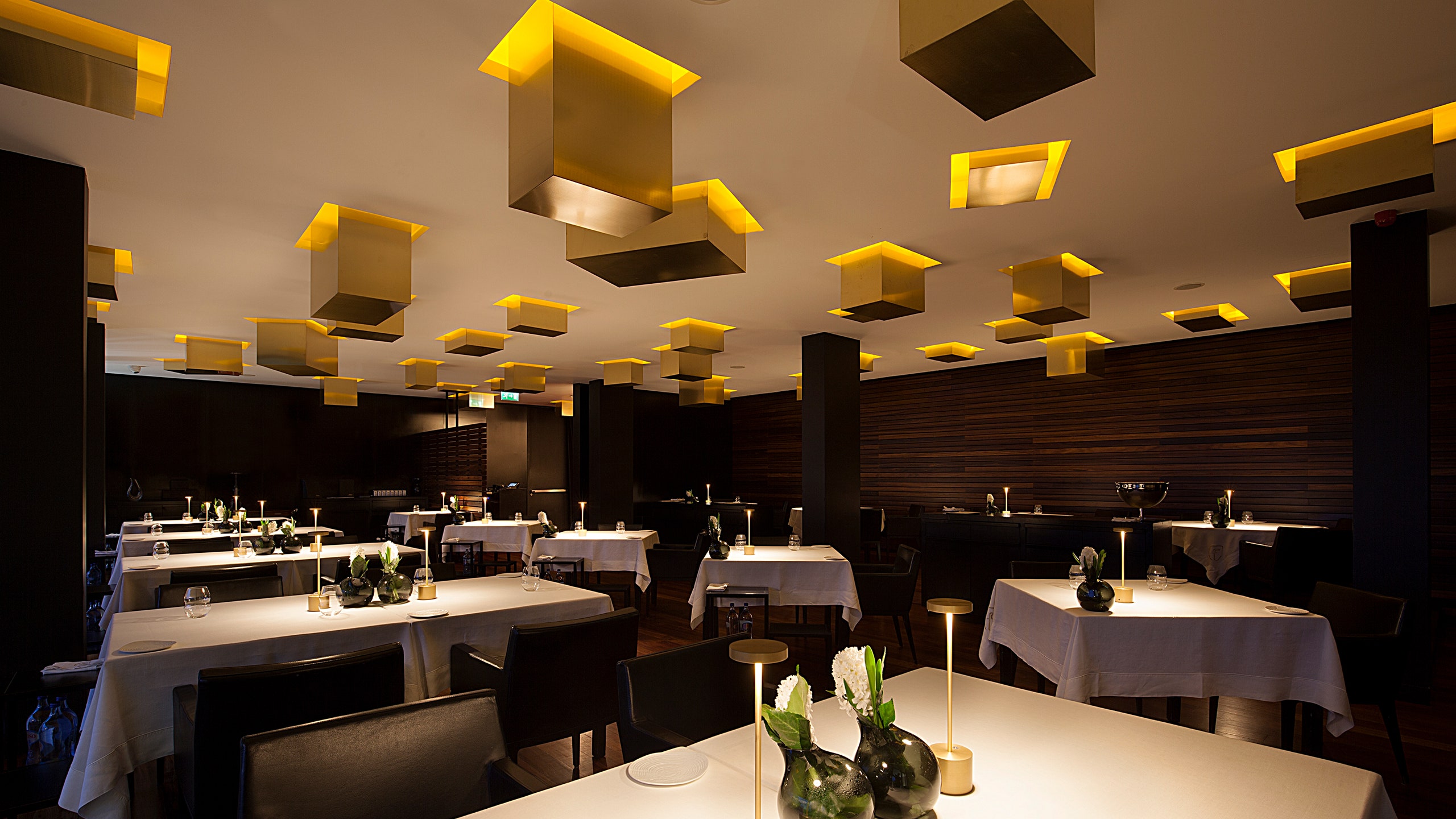 In Belém, by the Tagus River, where Portuguese navigators departed to explore the New World, chef João Rodrigues brings his best to the table at this Michelin-starred restaurant. Obsessed with top-quality ingredients (from organic local vegetables to the fish and seafood of the Portuguese coast), Rodrigues adds value without masking flavors. He’s also more and more committed to bringing Portuguese traditions to the plate in creative and contemporary ways. Feitoria is simply one of the best restaurants in town.

Visiting Lisbon without coming to Pastéis de Belém is like leaving Paris without seeing the Eiffel Tower. But there’s some confusion out there: Is a pastel de Belém a pastel de nata (custard tart)? Yes, it is — a special version. It’s said to have come from the nearby Jerónimos Monastery, and has been produced by this pastry shop since it opened in 1837. Expect queues, even in the early morning, and especially in the summer. But have faith — the tarts are worth the wait. Eat it warm with cinnamon or powdered sugar — and please, don’t order one to split. 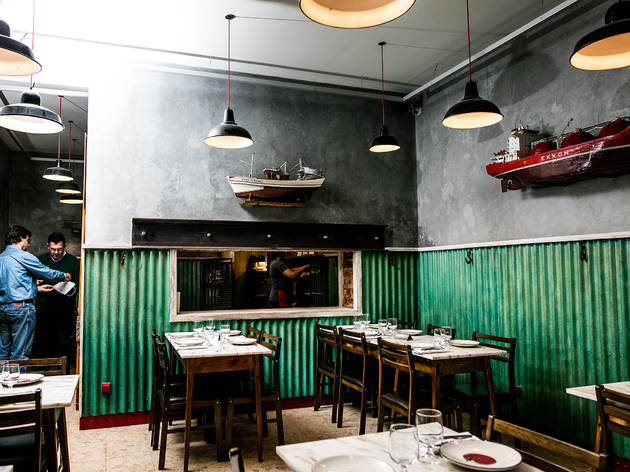 From the team behind beloved seaside Sal Restaurante in Comporta, Bota Sal is a more youthful Lisbon offshoot in the Estrela district. Lined with seafoam green corrugated metal walls and weathered wood chairs, the space channels its salty older sibling while delivering a more modern take on maritime cuisine. Try the sirloin steak, which comes with a house made sauce and French fries; there’s also an octopus salad, deep-water rose shrimp from the Algarve, and cuttlefish with baccon strips and coriander. For dessert, go for the lavender-infused milk custard.

The palatial facade of this former mansion makes quite the first impression, especially as a setting for this quirky, pharmacy-themed restaurant that shares real estate with the Museu de Farmácia in Lisbon’s Santa Catarina district. An AstroTurf-dotted lawn with cheeky patio furniture invites diners to enjoy an aperitivo with views of the Tagus River before moving inside for the main course. Pharmacia does petiscos—Portuguese snacks—right, with duck croquettes with orange jam and traditional rice with pumpkin and mint. This is a fun, offbeat place to kick off a night out. 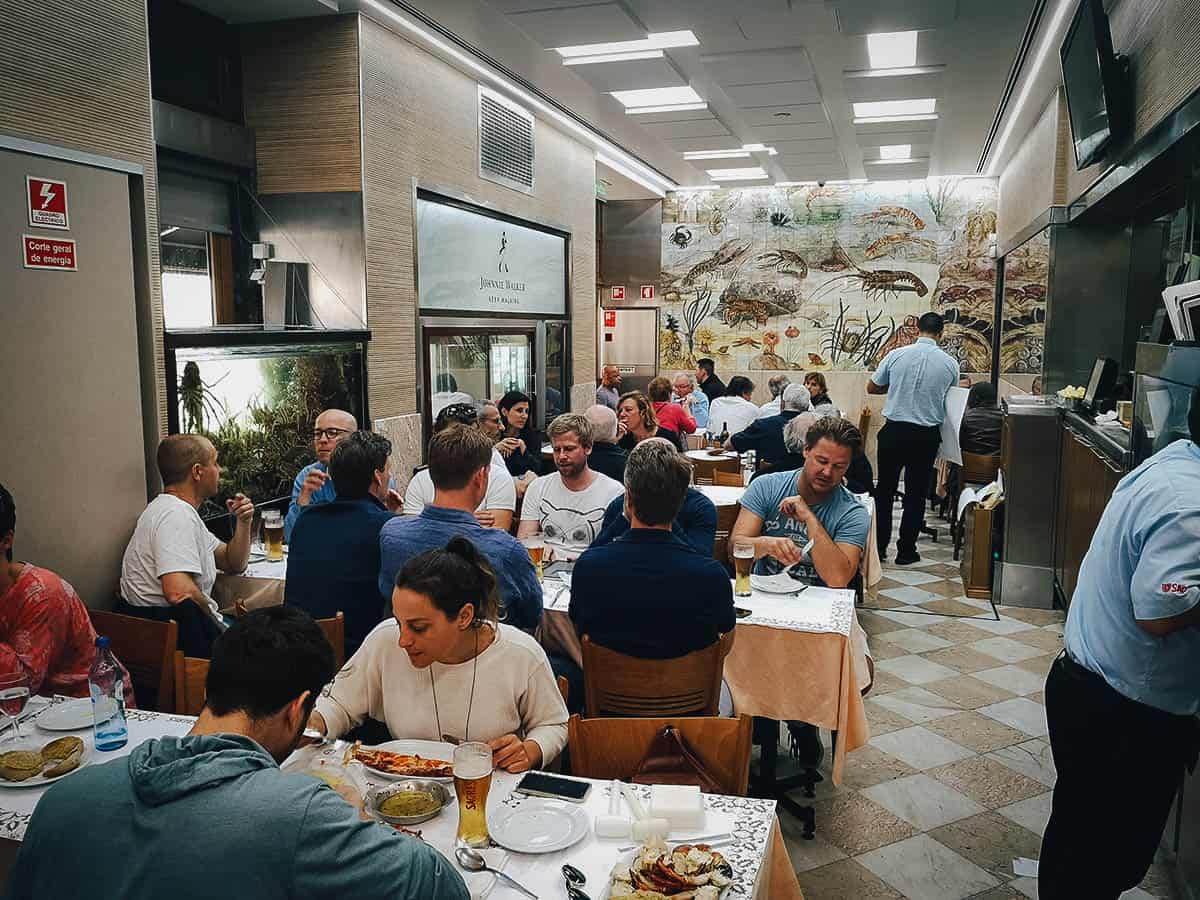 This beloved Lisbon beer hall and restaurant occupies three floors; but despite all the seating, you should still expect to wait in line before you score a table. Once you’re inside, it’s a scene to behold: a cacophony of chefs cooking, shrimp shells cracking, and glasses clinking, plus the contagious energy of a Portuguese fish market. If you want to do Cervejaria Ramiro right, start out with an aperitivo (locals go for a martini), then dive into the extensive Portuguese wine list. It’s heavy on whites—there’s a good selection of vinho verde—but don’t overlook the light reds that also pair well with the seafood. Mariscos (shellfish) are the specialty here, so be prepared to make a mess. Lobster, prawns—the gamba do Algarve is a must—and crab are all prepared to perfection and served by the kilogram.

If you want to travel through the Mediterranean flavors of Portugal’s southern Alentejo region without leaving Lisbon, O Galito, in Benfica’s residential area, is the place to go. The rustic yet elegant restaurant offers traditional soul food with a Mediterranean twist, perfectly matched with the beloved wines of the region. Don’t miss the açorda (a kind of stew made with bread and garlic) or the carapauzinhos (small mackerel) with tomato rice.  This is one of the best restaurants in Lisbon you should not miss.

Superstar (but notoriously spotlight shy) chef José Avillez is almost single-handedly responsible for cementing Portuguese cuisine on the world stage. His somewhat formal two-Michelin-star restaurant, Belcanto, is the pinnacle of Portuguese gastronomy. Choose the classic tasting menu (€165), and your tastebuds will be wowed with signature dishes such as the chef’s most famous work ‘The Garden of the Goose that Laid the Golden Eggs’ (egg, crunchy bread and mushrooms). Go with the Evolution (€185) menu, and unleash the kitchen’s creative mojo with blind-sidingly good dishes like sea bass with smoked avocado, pistachio oil, lime zest and dashi. Either way, expect Portuguese cuisine, re-calibrated.